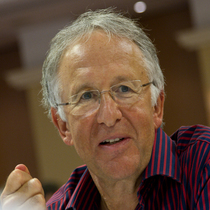 Michael Freeman co-founded Argent, the developer of Central London’s largest new project: 8 million sq ft on 70 acres next to St. Pancras International and King’s Cross. In recent years he has spent much of his time reading – and on his good days writing – about world history.

As a Foundation Trustee, he has been closely involved in developing the Isis Education Centre at The Look Out in Hyde Park; and chaired the judges in the competition sponsored by Tiffany  to design new public drinking fountains for The Royal Parks. He and his wife donated the Freeman Family Fountain in Hyde Park.

I have built up my own very successful business and sat on the board of various companies and can say that the board and team at the Foundation are among the most competent, active, proactive, talented, enterprising people I’ve come across. Although the Foundation is only 10 years old, it’s still early days and the best is yet to come.