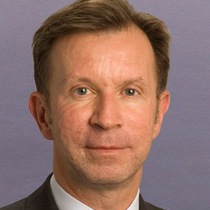 John Studzinski CBE runs Blackstone Advisory Partners and is a Senior Managing Director of The Blackstone Group. He is a member of the firm's Executive Committee. He joined Blackstone in 2006.

John Studzinski is Vice Chair of Human Rights Watch and serves on the Board of Directors of Bowdoin College, FAPE, The Passage Day Centre, American Patrons of Tate, and American Friends of the Foundation of Prince William and Prince Harry. He also serves as Chairman of The Benjamin Franklin House Museum and CREATE. He is a member of The Atlantic Council, The Council on Foreign Relations, The Royal College of Art and The Peterson Institute.

He founded the Genesis Foundation in 2000, as his personal foundation to support and nurture young and emerging artists. In 2008, he was named in the Queen's New Year Honours List for his services to the Arts and to Charity.