Bonding over tree suckers and thistles in Hyde Park

In July, William and Milly joined us for a week's work experience to find out about life working in a park. This is William's blog about his day working with volunteers to manage the meadows of Hyde Park:

On 17 July 2014, in scorching hot conditions, 2 Work Experience students, 2 Hyde Park team members, 4 Royal Parks Foundation workers and 50 Goldman Sachs employees embarked on a  6 hour adventure to clear up areas of meadowland in Hyde Park. By the end of the day all 58 people would feel physically exhausted but wholly satisfied.

The day started off like any other at the Isis Education Centre, I strolled in at 9AM under the impression that I would be chatting to some over 50s about my experience working for the Royal Parks Foundation. After having consumed 2 mugs of tea, much to my initial dismay I was greeted with the news that in fact I would be uprooting thistles and tree suckers with 50 volunteers from Goldman Sachs in a small area of Hyde Park occupied by meadows.

I made the stupid assumption that my day would be easy, perhaps I would watch the others hack at the thistles or simply stack them and hand them to the gardeners, I was wrong, in order to make this work everyone would have to try their very best.

After a short briefing and some more tea, me and the volunteers put on work boots and gloves and chose our weapon of choice in battling the evil thistles. I chose a shovel, as I knew that the shovel was more efficient in cutting off the thistle’s stem and then digging a 10 x 10 cm square around the thistle’s base in order to remove the root, others chose the mattock and would soon regret it.

Soon enough, work began in the meadow, we launched our initial offensive against the thistles, shovels flew and mattocks grinded against the cold, hard root of the thistle, but yet the thistles remained strong; for every one thistle I removed, 10 more would pop up around me, I felt overwhelmed.

As the morning drew on, the sun seemed to shine ever brighter upon our backs, and the sweat of 50 businessmen and women and 2 work experience students soon started to pour, it was back-breaking work, but the sense of accomplishment I found from annihilating an entire meadow of thistles was like no other.

We were a team, age meant nothing in this fight, there was a common enemy, and we would all work together to ensure we would defeat it, this is what kept us going more than anything else, the sense of teamwork and togetherness. Barely any of the employees knew each other at first, as Goldman Sachs is a multinational corporation with thousands of employees in different areas of the company, but soon everyone began talking and sharing stories, including me and Milly, the other work experience student. We were a strong and cohesive group. 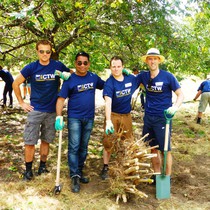 After a brief lunch, we returned to the meadow, only this time my group were given the task of taking out tree suckers, a job far more satisfying but also far more difficult. This was where our teamwork really shined, in order to take out a deep rooted tree sucker you need to work as a 3 or 4 and each person is assigned a task. Only if you work together as one group can you successfully remove the root. With lots of heaving, we removed the roots in record time and even got to take out a few more thistles before the day was done.

All in all, the teamwork and solidarity I experienced with the Goldman Sachs volunteers was magnificent, and it was these properties that allowed us to exceed everyone’s expectations in removing the thistles and tree suckers from Hyde Park.

The day embodied what the Royal Parks Foundation is all about, using teamwork to achieve a common goal that everyone believes in.