Holly gets ready to 'conker' the race!

"Once you’ve run the Royal Parks Foundation Half Marathon once, you will want to do it again. It’s an experience like no other. I first ran it in 2011 – this alone was a big thing for me. If you’d told a 15 year old me that I would one day run for pleasure, let alone a full on 13.1 miles, I would have never believed you. But I did it and I’m back again running it for a second time on 12 October 2014.

There are two ways to get a place in the Royal Parks Foundation Half Marathon– you can either chance it with the ballot or get a charity place. In 2011, I was lucky enough to win a place in the public ballot – first time lucky! I don’t think at the time I really realised how difficult it was to secure a ballot spot – I have entered every year since and not got a place!

Completing the race in 2011 was probably one of my greatest achievements. To put this in context, I am not at all athletic and was always the last girl to be picked for the netball team at school. I never did sport willingly, but then one year I decided to enter on a bit of a whim. Those months I spent training were hard and gruelling but somehow I made it through and before I knew it, it was race day. My biggest fear was that I wouldn’t be able to do it – I’d run up to 10 miles in training so the last 3 miles were an unknown…

The race itself went by in a blur – I loved the atmosphere, particularly looking at people’s costumes and wondering how anyone could run in a giant tennis ball! I won’t lie, there were times when I wanted to give up, but the crowd and a few sneaky jelly babies pulled me through. It helps that the route itself is stunning – past all the best sights in London like Big Ben, the Houses of Parliament, the Thames and then my favourite bit – up the Mall past Buckingham palace – before ending up back in Hyde Park and Kensington Gardens. What a day! 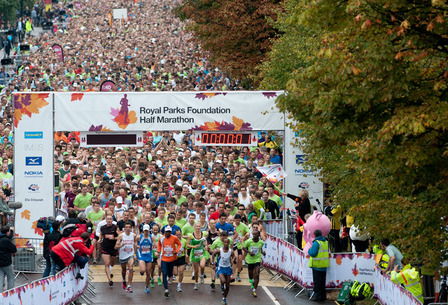 Running the race in 2011 really changed my relationship with the Royal Parks – for a start it got me out there. Training was difficult but the pay off was so great – I’ve seen some really stunning sights whilst running through the parks.

My favourite has to be the view from the top of Primrose Hill, followed second by the view from the bridge in St James’ Park – on one side you have Buckingham Palace and on the other you have Horseguards Parade and it really does look like the Magic Kingdom at Disneyland, but it’s real! I’ve always lived in the city and so really appreciate this slice of nature in the middle of the city. It’s a real refuge.

I really admire the work that the Royal Parks Foundation does – they make the parks even more spectacular than they are already by funding conservation projects to protect the wildlife, like pelicans, deer and hedgehogs; education projects that get school kids involved with nature and other innovative projects like meditation in the parks and restoration of landmarks such as the Italian Gardens… they do a lot really!

I truly believe that London would be a completely different city without these amazing parks – we are extremely lucky to have access to such beauty at absolutely no cost. One of the things I like the most is that people from all walks of life come together in the parks – ordinary Londoners as well as tourists. I want to make sure that future generations can enjoy the parks in the way that I do – so I didn’t have to think twice when signing up to run for Team Squirrel!"

We wish good luck to Holly and all our other squirrel superstars! To sponsor Holly for 'conkering' this challenge please visit her Virgin Money Giving page.

Feeling inspired? Are you free on Sunday 12 October to go nuts and unleash your inner squirrel?

We need enthusiastic volunteers to cheer on our 180 squirrels running the Royal Parks Foundation Half Marathon. In return, you'll get your own technical Team Squirrel running vest (made from soft bamboo), a goody bag and enjoy the free Food & Fitness Festival. Get in touch [email protected] and help support our squirrels.

To register your interest in running for us next year simply email Chester (our friendly squirrel mascot) [email protected].