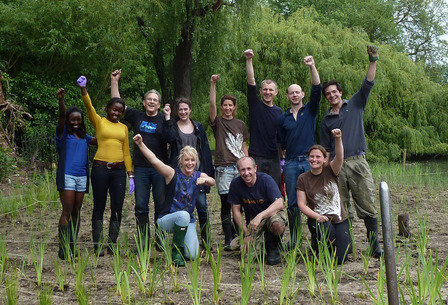 Last week, Sara and Jordanna worked with the team at The Regent's Park, the fabulous Chris from The Conservation Volunteers and a brilliant team of volunteers from BNP Paribas to plant up a new area of Reed Bed in The Regent’s Park boating lake.

The sun shone down on us as we briefed the volunteers on the task in hand and got cracking planting up a range of Reed Bed plants including Iris pseudacorus, known as 'Yellow Iris' and the Phragmites australis - known as 'Common reed'.

not too much wading around, so we all got stuck in, creating holes with crowbars and mattocks to plant up over 2000 plants of 6 different varieties to transform the area – not a small task!

Reed Bed habitat has decreased dramatically in London in recent decades and The Regent’s Park team is working hard to re-introduce this wildlife rich environment into the Park to provide home to many of London’s more interesting and uncommon wildlife which are dependent on the dense cover provided by the reeds. Wildlife includes:

It was a fantastic day and the job got done with incredible amounts of enthusiasm. We’re really excited to watch this area grow and flourish over the next few years so will be visiting it regularly to follow progress so watch this space!

Peter, one of the volunteers, talks about his day and why he loves The Royal Parks.