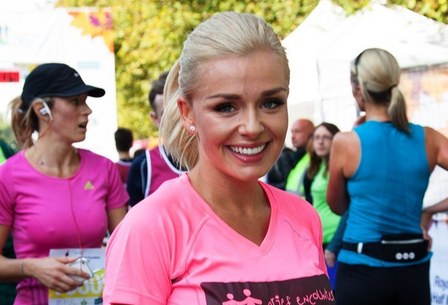 Award-winning Welsh mezzo-soprano, Katherine Jenkins, is to be an Ambassador for our Royal Parks Foundation Half Marathon on Sunday 6 October. She will be raising money for The Royal Marsden Cancer Charity in this year’s event. She tells us:

' friend of mine has a very young granddaughter who has been recently diagnosed with cancer and as a result is being looked after by the wonderful staff at the Royal Marsden. I know that many families are touched by cancer as mine was with my father, however I cannot imagine how terrifying this must be in somebody so young and that is why I wanted to do something to help.'

We wish her, and all our other charity fundraisers, the very best of luck and we're thrilled that Katherine has agreed to be an Ambassador for our flagship event. We think she is a fantastic role model for young women across the country and, with a fan base that spreads even further than that, we hope she will inspire other runners to sign up, and show that running and glamour are not mutually exclusive!

This year’s field is set to be the largest ever with 16,000 runners from all over the UK and more than 30 countries around the world taking part. Katherine has chosen a great year to be an Ambassador for the race and we wish her the very best of luck for the day.

Katherine, who has received two Classical Brit Awards, is well known to the sporting as well as musical communities. In addition to her impressive running achievements, she sang the National Anthem at this year’s Grand National and has previously sung the Welsh National Anthem at Six Nations rugby fixtures.

Viewing myself as a non-athletic person, I prove the example that with some training and an good mental attitude you can achieve the things you thought you would never could, in my case, running a half marathon and even a full marathon. The Royal Parks Foundation Half Marathon is such a lovely run with beautiful scenery and a great atmosphere and I would highly recommend it to anyone who wants to take on a challenge. I hope to see you there!”

2013 marks the sixth year the Royal Parks Foundation Half Marathon has taken place. So far it has raised more than £15million for 455 charities. This year’s Half Marathon, which we run in partnership with Limelight Sports, is expected to raise record amount for the largest number of charities ever supported by the event.

There are just 12 weeks to go for runners to get in shape for the Royal Parks Foundation Half Marathon. There are still charity places available, and companies can also enter teams for our Corporate Challenge. Visit the Royal Parks Foundation Half Marathon website for information on how to sign up. Runners have until August 16th to register but can start training now.