As the world waits to learn the name of the new Prince of Cambridge, we're able to announce the name of another recent arrival in The Royal Parks... Isla is to be the name of one of the three young Great White pelicans released into St James’s Park, earlier this year.

Isla was chosen by public vote as the name of the pelican, which was one of three given to St James’s Park by Prague Zoo this spring. The name was chosen after almost 400 people took part in a poll on our website when asked to 'Name a Pelican' and decide between six possible names. Other names included: Bela, Bety, Karola, Isla, Pearl and Queenie.

Isla was the name suggested by Malcolm Kerr, Senior Wildlife Officer for the central Royal Parks, who has been caring for the pelican colony in St James’s Park for more than 35 years. He suggested naming one of the pelicans Isla after his daughter, reflecting how the pelicans have become like children to him! Malcolm was clearly not alone in liking the name: Isla came top in the poll with 23 per cent of the vote. 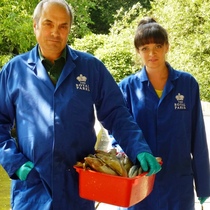 Isla Kerr visited her dad last week to feed her pelican namesake. She said of learning of the new name:

I just felt proud for my dad because he has worked at St James’s Park for such a while. It’s also quite a privilege, in a strange quirky way: not many people can say they have a pelican named after them!”

Isla now joins Tiffany, the other new female pelican, which is named after the Tiffany & Co. Foundation, the US foundation behind the pelican donation. The third young pelican will be named later in the year. The three newcomers share the lake with Gargi, Vaclav and Louis, the resident pelicans, which are all now over 20 years old.

It is a really nice surprise to have one of the pelicans named Isla and I’d like to thank all that voted. The pelicans are a great addition to our park. Caring and feeding them is a highlight of my day - I definitely have no excuse for forgetting their names now!

Having pelicans on the lake at St James’s Park is a 349-year tradition that delights millions of visitors to the park every year. The first pelican to grace the Royal Parks was a gift from the Russian Ambassador to King Charles II in 1664 and the colony has thrived ever since.

We think it's lovely that our new, young pelican has been named after Malcolm’s daughter. He has done a fantastic job of looking after these splendid birds for over 30 years, so it is fitting that his daughter now has a namesake amongst them. And we're sure you will agree!

'Pelicans in the Park' is part of the Tiffany Across the Water project, where thanks to the generous support of the Tiffany and Co Foundation, we have also been able to restore and renew many of the ornamental and drinking fountains across London’s eight Royal Parks.