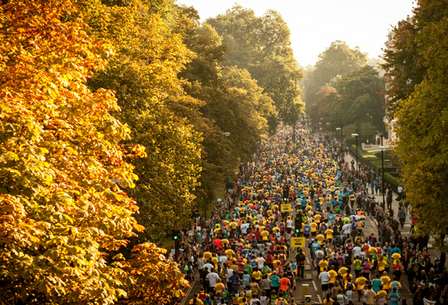 This year’s Royal Parks Foundation Half Marathon on Sunday 12 October looks sets to be bigger and better than before. More than 16,000 runners will join the starting line at Hyde Park to run the stunning 13.1 mile autumnal route dubbed the most beautiful run in the world’s greatest city.

We have own team of runners called Team Squirrel lead by its mascot Chester Squirrel. Our trustee and race ambassador Ben Fogle is running for Team Squirrel, the charity’s 180-strong running team which is hoping to raise £50,000 for activities in the Royal Parks, including an education programme for young people at the Isis Education Centre in Hyde Park.

The event also aims to be as green and sustainable as possible. Every year official race shirts are made from sustainable bamboo and recycled polyester (from recycled plastic bottles!) and every runner gets a nature inspired medal made from leaf shaped FSC-certified wood.

As part of a partnership with Marks & Spencer, more than 120,000 plastic bottles are collected and recycled with Closed Loop Recycling, running clothes that are discarded along the route are donated to Oxfam, and surplus food redistributed to those in need by Fareshare.

The Food & Fitness Festival offers a feast of street food inspired goodies with something for everyone – alongside free activities for all ages. This year’s activities include