The 2012 Royal Parks Foundation Half Marathon ballot is now open...! 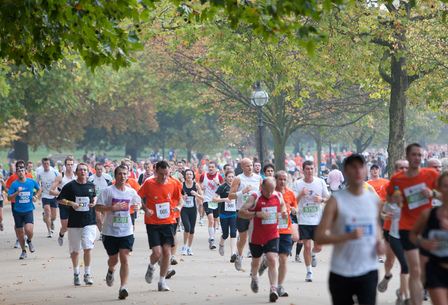 The ballot gives everyone an equal chance to be at the start line on the 2012 Royal Parks Foundation Half Marathon, and will remain open for nine days until 5pm on Thursday 26 January 2012.

Successful entrants will find out if they have won one of the coveted race places by email on Monday 30 January 2012, when the draw takes place.

Over three years, the popularity of this top-quality, charity event rocketed to the point where public places sold out in just two hours. The ballot is a much fairer and friendlier way for entrants from the UK and abroad to try and secure their spot on the start line and, in this great year for British sport, we look forward to a particularly exciting race day.

Renowned for its carnival atmosphere and family-friendly appeal, race day also features a scrumptious Food & Fitness Festival, with a host of fun-filled activities and delicious food for runners and their families to enjoy.

And if that isn’t enough, there is also Pulse3K, a race designed to encourage 11-16 year olds to get fit for their sport outdoors with their friends.