Tim Heming talks about how he 'embraced his inner squirrel' 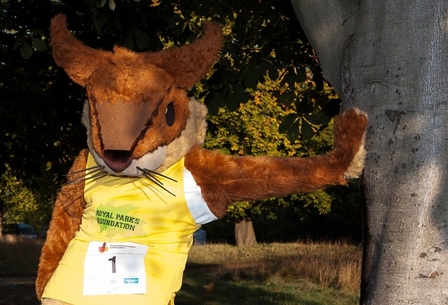 This year, Tim Heming, journalist for the Sun Newspaper, ran the Royal Parks Foundation Half Marathon  as Chester Squirrel, sporting No 1 on his shirt. He shares his golden rules to running as a 7ft mascot...

Mo Farah, Paula Radcliffe, Haile Gebrselassie, Chester the Squirrel. What do all these distance runner have in common? The honour of having No 1 pinned to their chest on the start line. Big favourites in a big city race.

No question the first three have delivered over the last decade but when it came to Chester’s big moment, in the Royal Parks Foundation Half marathon on Sunday, it was always going to be a tough ask.

Chester had failed to take the tape in four outings since the inaugural event in 2008 and with media commitments disrupting the pre-race routine, he became boxed in at the start and was narrowly beaten into 8,030th.

However, history will show - despite the internal cooling fan breaking and the feeding tube becoming trapped eight miles in - he kept his game face on throughout (he was contractually obliged not to speak or remove his head in public).

Lolloping through to the finish in 2 hours and 13 minutes, the official mascot hung tough for a new squirrel record, and before hibernating for 2013, just had time to reveal how it was done:

Nobody likes to see a giant squirrel trampling joggers in London’s parks but despite Jo’s hollerings - and they got louder as the miles ticked past and the adrenaline soared - a few ‘plugged in’ people got unfortunately stomped. Nothing’s Gonna Stop Us now. Nothing except being sideswiped by a giant, swaying squirrel’s tail. Sorry. We tried to warn you. You couldn’t hear and we couldn’t really see.