Amore revived in the Italian Gardens 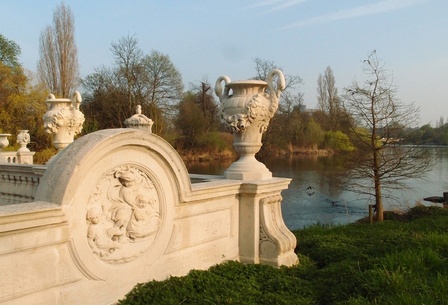 The Italian Gardens in London’s Royal Parks have been restored to recapture the glory of the 1860s when the Gardens were first created as a gift from Prince Albert to his beloved Queen Victoria.

The 150-year-old Grade II listed ornamental water gardens, near Lancaster Gate on the North side of Kensington Gardens, have undergone significant restoration work including:

The works together cost £486,000 ($778,970.99), and have conserved these beautiful gardens for future generations of Londoners and visitors to enjoy.

The restoration is the final element of a campaign called Tiffany - Across the Water made possible by a $1.25 million grant (£784,000) from the Tiffany & Co. Foundation to the Royal Parks Foundation (USA), a charity established to enable Americans to support the natural history and heritage of London’s Royal Parks.

Tiffany - Across the Water focuses on restoring ornamental and drinking fountains across the 5,000 acres of the eight Royal Parks. The funding has also enabled an international competition with The Royal Institute of British Architects (RIBA) to design London’s newest, most robust and beautiful drinking fountains - as well as the re-creation of a stunning twenty-foot water plume in St James’s Park lake.

The Gardens provide a beautiful corner of Renaissance Italy in London and will bring renewed joy to millions of visitors every year. Tiffany – Across the Water has not only conserved the Royal Parks’ wonderful heritage, it has also spread romance through our capital city. That is an amazing gift.”

The challenging restoration work at The Italian Gardens involved painstaking stone carving, cleaning and restoring the famous Tazza Fountain overlooking the Long Water, renovating the benches, and installing a new, cleaner, water system, topped up by a borehole. The Royal Parks ecology and landscape architecture teams have also designed a display of aquatic plants, anchored in the four perimeter basins, reflecting how the Gardens might originally have appeared.

The intricate stonemasonry included carving eight life-sized swan heads and necks, as replacement handles on some of the urns. The Tazza fountain, made from a mix of Portland stone and white marble, had suffered significant deterioration and required a great deal of fine carving on-site to conserve the acanthus band and mermen supporting the bowl.

The central rosettes in the four main basins, all elaborately carved in Carrara marble, also needed careful cleaning and some elements replaced with newly carved marble.

Part of our Foundation’s mission is to preserve the natural heritage that distinguishes great urban centres. To that end, we established a parks program that began with support for the green spaces of New York City, where Tiffany was founded, and now has expanded to include parks in other major cities. We have greatly enjoyed working with the Royal Parks Foundation over the last three years to support and maintain London’s tradition of parks that provide respite and recreation to its citizens and visitors from around the world.”

The Italian Gardens – one of the Royal Parks' greatest treasures – have been beautifully restored. Thanks to everyone involved in the Tiffany - Across the Water project, these historic royal gardens and other fountains across the Parks, can be enjoyed by generations to come."