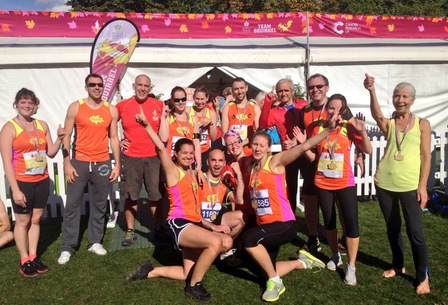 Our amazing squirrels rose just over £46,000 to help support London’s eight magical Royal Parks and keep them beautiful and bursting with life - thank you to each and every one of you, you’re all squirrel superstars!

If you’ve seen our jazzy Team Squirrel running vests scooting around London’s Royal Parks and felt a little bit jealous, now’s the time to get involved in 2014 and join the nuttiest team in the Park.

Our Squirrel-ers come from all over the world, Brazil to Germany, America to Australia – we’re an international scurry of squirrels and next year we’re growing with race places in the Half Marathon, Ultra AND the London Duathlon!

Check out Paola and James who embraced the squirrel spirit and travelled from America… on their honeymoon to run the Half Marathon... Congratulations again to you both!

Why not choose your Squirrel Challenge for 2014 and register today to start your New Year off with a flurry of activity.