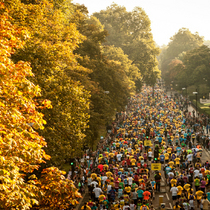 In 2008 we created a spectacular Half Marathon in central London – the first and only one of its kind.

It gives runners a chance to enjoy the Royal Parks, get fit with a running challenge and help us raise millions of pounds for charities across the UK, including our wonderful Royal Parks.

The event was set up as an annual fundraising initiative, raising sustainable funds for the Royal Parks Foundation to support London’s eight Royal Parks, and enabling charities of all sizes to be involved in a major challenge event. In its first seven years we are thrilled to see that runners have raised over £21million for more than 500 UK charities.

For more information about the event, please visit the Royal Parks Half.

Run for the Parks