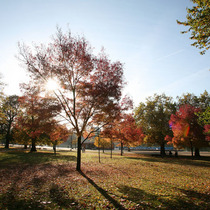 One of London’s finest landscapes covering 350 acres, Hyde Park was opened to the general public by Charles I in 1637. Prior to that it was originally acquired by Henry VIII in 1536; he and his court were often to be seen on thundering steeds in the hunt for deer.

Hyde Park is a vast open green space right in the heart of London, where there’s something for everyone.  From recreational activities such open water swimming and boating on the Serpentine Lake to concerts and exhibitions in the summer months. It’s also home to a number of famous landmarks including Speakers' Corner and the Diana, Princess of Wales Memorial Fountain.

Millions of Londoners and tourists visit Hyde Park every year and as the charity for London’s eight amazing Royal Parks, we’re here to make sure that everyone can enjoy the Park now and in the future. Find out how you can support the Royal Parks here.

Pictures in the Park

We partner with The Nomad Cinema so you can experience the joy of film within London's Royal Parks.

Learn more about the sculpture of Isis by Simon Gudgeon, based in Hyde Park.

A programme where children and volunteers plant bulbs in the Parks to help support wildlife and give visitors a beautiful experience.