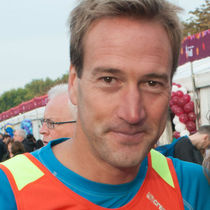 Ben Fogle is a presenter, writer and adventurer. His achievements include racing 160 miles across the Sahara desert in the notorious Marathon Des Sables. He has rowed the Atlantic Ocean in 49 days and crossed Antarctica in a foot race to the South Pole.

Ben has presented numerous programmes including: BBC’s Animal Park, Wild In Africa, Countryfile, Crufts, One Man and His Dog, Extreme Dreams, Harbour Lives on ITV1, two series of New Lives in the Wild, Swimming with Crocodiles for BBC2, Year of Adventure for BBC Worldwide, The Secrets of Scott's Hut and Make Me a New Face, both for BBC2. He is filming a third series of New Lives in the Wild, and also Storm City for Sky 1.

Ben writes regularly for the Sunday Telegraph and the Independent and has written five bestselling books. His latest book, The Accidental Adventurer is out now.

He is an ambassador for WWF, Medecins Sans Frontier and Tusk, a fellow of the Royal Geographical Society and the President of the Campaign for National Parks.

Ben is a special correspondent for NBC News in the United States, reporting from all over the world for Today, Dateline and MSNBC Nightly News.