With the help of the Royal Parks and Sing London we've managed to bring the 18ft Achilles statue in Hyde Park to life. You can swipe your smartphone on a nearby tag and get a personal ‘call back’ from the Greek hero of the Trojan War.

On the other end of the line, you’ll hear a monologue from a restless Achilles written by award winning playwright Rebecca Lenkiewicz and voiced by The Wire actor Dominic West. 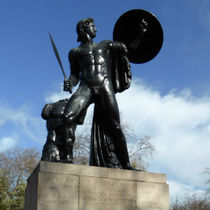 The statue located near Queen Elizabeth Gate at Hyde Park Corner is a tribute to Arthur, Duke of Wellington, for his victories in the Peninsular and Napoleonic Wars. Installed in 1822, Achilles is cast from cannon captured in the victories of Salamanca, Vittoria, Toulouse and Waterloo. It was the first statue erected in Hyde Park, and originally was completely nude causing outrage. A small fig leaf was added soon after to protect Achilles’ modesty.

Actor Dominic West says: “I think it is a brilliant idea. You tend to walk past these statues without a second glance. It’s intriguing to imagine the life behind them”

Achilles is the second statue in the Royal Parks - earlier this year, the bronze Peter Pan Statue in Kensington Gardens also found its voice, transporting listeners back to Neverland, the home of the boy who never grew up and his gang of Lost Boys.

The statues will be talking for one year – check out this map to plan you visit.

Things to do Other Activities