Take a relaxing stroll around St James’s Park Lake and see a wonderful new water feature – The Tiffany Fountain at Pelican Rock - which offers visitors a visual feast and the cool sound of tumbling waters. 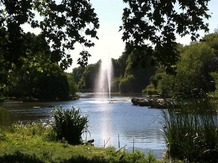 Taking centre stage in the lake, this stunning 20ft water plume leaps against the magnificent backdrop of Buckingham Palace, Whitehall and Horse Guards Parade, greatly enhancing the special views across the Park.

On special occasions, the jet is illuminated at night in any one of a rainbow spectrum of colours, creating a sense of enchantment in the Park.

The Re-creation of the Fountain

The Tiffany Fountain re-creates an historical fountain first installed at Pelican Rock in 1966. It was de-commissioned due to wear and tear some thirty years later, in 1996.

The new plume will help aerate St James's Park lake to benefit its wildlife and has been made possible by a generous gift from The Tiffany & Co. Foundation to the Royal Parks Foundation (USA), a charity established to enable America to support the natural history and heritage of London’s Parks.

Working with The Royal Parks, the fountain was launched by Jools Holland in July 2011.

Photos of the Tiffany Fountain