Hedgehogs in The Regent's Park

Did you know that hedgehogs still live in The Regent’s Park? 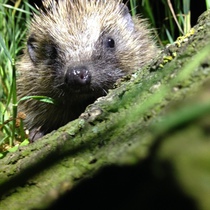 Hedgehogs are one of the nation’s favourite species, yet there’s been a worrying nationwide decline in hedgehog numbers in the last 25 years and The Regent’s Park is now the only central London Royal Park with a breeding population.

With the help of top wildlife scientists and over 100 volunteers, we discovered a small population of around 40-50 animals living and breeding in the Park in 2014. Our hedgehog team returned to The Regent’s Park in May and September 2015 to see how the vulnerable population had fared over the winter and find out more about their nocturnal activities.

We're working with The Royal Parks, The Zoological Society of London (ZSL), People's Trust for Endangered Species, the Central Royal Parks Wildlife Group, two eminent wildlife scientists and lots of amazing volunteers to survey the hedgehogs in Regent’s Park. We're aiming to find out all about this elusive nocturnal animal and help safeguard this precious population. Find our more about the scientific study and our research methods here. 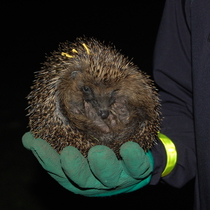 Technology played a huge part in 2015’s study, with thermal imaging cameras being used, a rarity in these types of projects, along with radio tagging and GPS tracking. A DNA analysis of the hedgehogs’ spines is also planned for the summer to find out more about the genetic make-up of this small population.

What did we find in the Park?

How you can support the hedgehogs 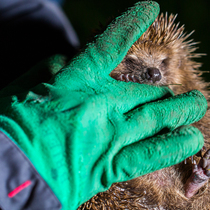 The Regent’s Park hedgehog population that we're studying  is an isolated and extremely vulnerable one, which needs protecting. There are lots of ways you can help support the hedgehogs in Regent’s Park - find out all about them here.

You can keep up-to-date with this project and all of our work by following us on Facebook and Twitter.

To find out more about how you can help hedgehogs in your garden visit Hedgehog Street.